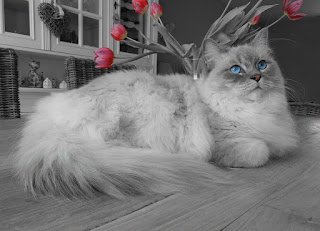 To date, no one explains the poor muscle tone of Ragdoll cats, their ability to relax when taken in the arms is quite surprising, it is most probably the consequence of great confidence they have towards people.
Ragdoll cats are indoor cats par excellence; they are terribly home-loving. Radgoll is overflowing with kindness; his life will be punctuated by cuddles. It is very quiet, it is never stressed. He shows no aggressiveness, so he must remain careful that he is not attacked by other animals and that the children respect him because he will not be able to defend himself. He loves to play: my cats play like dogs, they take a toy that must be thrown and that until exhaustion of one of the fighters, and you guessed: it’s always us .
He devotes an overflowing love for children, other animals and he very soon becomes the ideal companion. He knows how to be discreet while always present.
Ragdoll cat always follows the movements of the family: When you set to the table, he takes the empty chair ; you rest in the living room, he occupies the back of the sofa; You take a bath, he sits on a ledge of the bathtub … The biggest dilemma to solve about him is when a family member is in one room and another one elsewhere …

Caution is to be taken toward the unsterilized cat, its character and its behavior may show some changes due to the heat very frequent for the pussy and the need to mark its territory for the male who can emit jets of urine almost everywhere.  To ideally live in perfect harmony with your cat, you’d better have him or her sterilized in about 6/8 months. Reproduction in animals is purely instinctive.
Ragdoll is a big cat, its weight varies approximately from 4 kg to 8 kg (but wait: a heavy cat does not mean a fat cat). The dimorphism between the male and the female is important. It has a semi-cobby silhouette (massive and rather short), a fur with long hairs. It will only have its size and final color between 2 and 3 years.
RAGDOLL  is taken for a fashion engraving. Who would not succumb to her beautiful blue eyes? He is beautiful and intelligent. He knows perfectly the power of this beautiful look and his little voice.
It is one of those breeds of cat – dogs that live only for their master. He is looking for his company. It is a cat who loves dynamism and extremely dislike to be alone. As a clown-like pet, he is also an inveterate player, who never miss to attract the attention of people when they seem to forget him. His massive body does not prevent him from performing beautiful figures of style. It takes advantage of the tiles to launch into controlled and especially uncontrollable skids. His wit is amused by nothing: a shadow, a leaf, a tuft of hair .The Ragdoll has a deep attachment for his master. It happens that they communicate together only by glances. Despite this dumb connivance, the Ragdoll also likes to converse, through small soft meowings that are not insistent. The ultimate objective of this cat is undoubtedly the happiness of its master. Though a little rascal at his hours, he obeys the latter, or at least pretends.
He hopes thus to obtain the supreme reward: a passage in the arms of his master. He loves to be worn. He enjoys his time in the arms of humans, so much that he no longer contracts any muscle and thus becomes a real rag doll. He attributes total confidence to his master. This cat a little too nice does not mistrust enough. So, if he likes fresh air, it’s better to let him out in a screened garden. He ignores all the wickedness of the world.
In short, the Ragdoll is a “family” cat who, if he appreciates humans and other animals, selects his master from the family, and then loves him with all his little cat heart.

What Do You Know About The Sphynx Cat? Would You Like To Have One At Home?

The Domestic Cat: An Introduction to The Deep Sides of The Mysterious Feline