Home CAT BREEDS What Do You Know About The Sphynx Cat? Would You Like To... 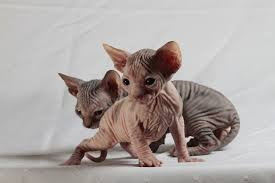 The Sphynx cat breed, this famous nude cat with pleated skin, is particular not only because of its unique appearance, but also because of its faithful and affectionate behavior reminiscent of that of the dog.

At first sight, the sphinx gives the impression of an animal of weird appearance and personality, often raising conflicting feelings that range between attraction and repulsion.

Many can perceive this feline as an alien. However, if one does not stop at the first impression and takes his time to discover this fascinating breed, one can quickly fall under the spell of its touching gaze, its elegant gait and its incredibly soft skin.

Weight
6.5 to 11 pounds. The weight of this cat is seen as average.

Eye Color
All colors are allowed. The color of the eyes of the Sphynx cat is determined according to the color of its coat.

The Sphynx is the only cat in the world not to have fur. However, it has a very fine fuzz on the majority of its body, which gives its skin a touch “peach skin”.

The Cat Sphynx: a naked cat, but garnished with folds

Clearly, the main characteristic which distinguishes the Sphynx from other breeds is the lack of fur. However, although it is called “naked cat”, the Sphynx is not completely hairless.

Its skin is covered with a soft and warm fuzz that recalls peach texture. Hair can also appear on the muzzle, behind the ears and at the tip of the tail.

Note that several kittens are born with hairs along the vertebral column, but these will disappear as they grow up.

The Sphynx has no whiskers, but this does not prevent him from being a good hunter and to live quite normal life.

Ideally, the skin of the Sphynx should have as many folds as possible, especially in kittens. The wrinkles are located mainly on the forehead, muzzle, chin, neck and legs.

In order to compensate for the lack of hair, the Sphynx’s skin is thicker than that of other cat breeds. Besides, there is a layer of abundant in fat under the skin to keep it warm.

Though thick, the sphynx’s skin often reveals his throbbing veins. The skin of the Sphynx breathes, gets dirty, bronze and reacts like human skin. Thus, in summer, it perspires to evacuate the heat and can catch sunburn.

The lack of fur in the Sphynx cat breed does not represent a genetic defect or a disease. This phenomenon, called hereditary alopecia, is due to a gene that has mutated spontaneously and naturally, not genetic manipulation or a health problem.

Other physical features of the Sphynx breed

The head of the Sphynx is a little longer other than large, and is characterized by angular outline. The cheekbones are very prominent and the nose is long. The ears, very large, carried low on the head and wider at the base, recall those of a bat. The eyes are lemon-shaped, well-opened and expressive.

All colors are allowed for the eyes; they are determined according to the color of the coat (skin). The body of the Sphynx is built around a fine skeleton, a powerful musculature and a large chest.

The legs are rather long and thin, the feet are oval and the fingers are outstretched. The paw prints are particularly thick, giving the impression that it is walking in the air. The tail is long and thin, like a whip, like a rat’s tail.

Color of the Sphynx’s coat

The Sphynx obviously has no fur, its skin takes the color of the hairs it would have had. All coat colors are possible in this breed. However, the lack of fur changes the shades more or less noticeably.

The image of the naked cat would go back to a long time ago. In some areas of Mexico, very old wall engravings have been found, suggesting the presence of naked cats.

Researches have shown that the Aztecs revered these cats, which they had bred.

Naked cats were also described in 1830 in J. Rengger’s Natural History of Mammals of Paraguay.

The first two specimens of naked cats appeared in New Mexico among Indians and it was Mr. J. Schinck who would have noticed them.

If the naked cats have existed for several centuries, the appearance of the Sphynx and rebreeding of this breed is quite recent.

Indeed, the modern lineage originated from the spontaneous appearance of a hairless male kitten in Toronto, Canada, in 1966. It was preserved in order to perpetuate the variety, and then it was brought back from Toronto to the Netherlands by Dr. Hugo Hernandez.

He worked extensively on the breed by natural genetic mutation and introduced his cats in 1973. Only ten years later, in a Parisian exhibition, the cat Sphynx attracted great interest. Then the breed was exported to the United States.

Today, the Sphynx breed remains quite rare and breeders are consequently few in number. 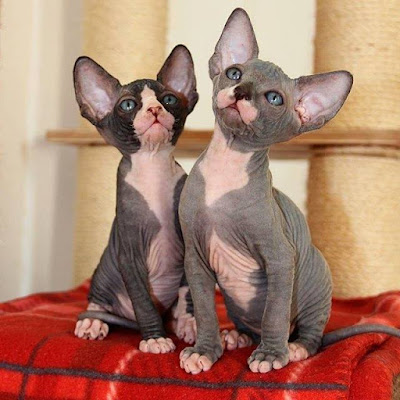 The Sphynx is a real pet cat. Extremely affectionate, loves to be cajoled and needs his masters to feel safe. It is even sometimes a real pot of glue; Some sphynxs may tend not to leave their master even a moment alone.

This faithful companion brings back its toys, welcomes visitors and runs when it is called, hence his name of “dog-cat”.

The cat Sphynx will not hesitate to come and perch on its owner’s shoulder to attract his attention. This cat is particularly sociable and patient with other pets.

The Sphynx is never aggressive and accepts very well to share its territory. Playful as it is, the sphynx will appreciate having one or more play partners around the house. It is an intelligent cat that is bound to soon learn to open the doors or taps. Remember that it is possible to train them with rewards and incentives.

Although it is devoid of fur, the Sphynx cat requires a special grooming.
Like the man, the Sphynx transpires through the skin. Moreover, the sebum of its skin is not absorbed by hair, which results in greasing its body.

To remove excess grease and deposits from perspiration, the skin of the Sphynx should be cleaned with a wet washcloth once a week.

Moreover, since it does not possess melanin, the skin of the Sphynx is very sensitive to the rays of the sun and is subject to the burns. It is imperative to apply sunscreen to your Sphynx while sunbathing (your sphinx loves sunbaths very much!).

The ears of the Sphynx should be regularly examined , as the production of cerumen in this breed is abundant.

Contrary to what the frail look might suggest, the Sphynx is not a fragile cat. Although it is not advisable to let your sphynx spend the night out, the naked cat very well resists the cold thanks to the thick layer of fat that it develops under its skin and which allows the sphinx to even go out in winter.

However, some sphinx cats may be affected by a disease called MHC. This is a hereditary disease that can skip several generations, so it is impossible to guarantee that a kitten will not bear the disease.

This affection has the effect of shrinking the heart walls, which causes the latter to slow down more quickly.

Is Sphynx the right choice among all the other cat breeds? 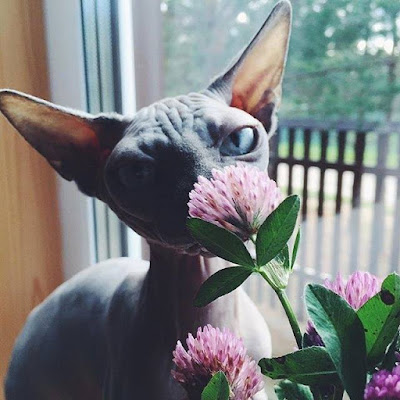 • The Sphynx is an indoor animal, it particularly appreciates the life in flats.
• During the summer, it is prone to overheat and tends to sweat a lot. You’ve got better install a personal and cozy corner in the house and to avoid letting it too often outside.
• It is also an agile cat, who loves to climb everywhere. Thus, it is advisable to provide the Sphynx with a high perch or a cat tree.

• Humans are essential to the well-being of the Sphynx. Thus, the Sphynx basically needs a devoted and available master, willing to give him enough affection and time.
• If on the contrary, you are a very busy guy, the Sphynx is not the cat breed for you. Being sociable and having an excellent character, Sphynx is compatible with the presence of young children and other domestic animals.

Where to find Sphynx for sale

The Domestic Cat: An Introduction to The Deep Sides of The Mysterious Feline