Home CAT STORIES Vidoe: Found In Shared Destiny, A Kitten And A Puppy Helped Each... 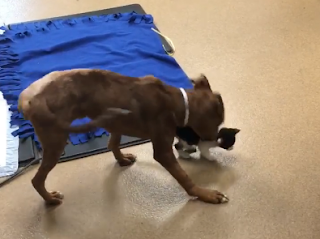 Making King and Laila meet was probably the best decision on the part of the shelter’s staff as the two animals both were in dire need of a lot of attention and love.

Sometimes all you need to get better is a friend and that’s exactly what King and Laila were missing when they arrived at the Kentucky Humane Society Lodge. The 8 month old puppy was taken care of with a broken leg.
But his wound was several months old and had never been treated. Unfortunately, the veterinarians had to amputate her but her life was saved. As he recovered from his surgery, a 4-week-old kitten in a state of concern was collected.

Laila suffered from severe anemia and had to be monitored and cared for 24 hours a day. “She fights like a little devil to survive,” says the association to Love Meow.
While King was crying for attention and not being alone, the little feline meowed desperately to receive a little love. “So our vets decided to put them together to see if they could not reassure each other.”

And that’s exactly what happened. Those who have gone through so many hardships have immediately understood. In contact with King, Laila began to purr like a motor and fell asleep in his paws, filling the doggie with happiness.

The next day, the two animals seemed to get better and walked around the room, the little kitty following her big canine brother as his shadow.

They have become so close and their encounter has helped them so healing that the refuge hopes that they can be adopted together to never be separated.