Home CAT STORIES The Cat of The Year: Helped A 11 Year Old Girl To... 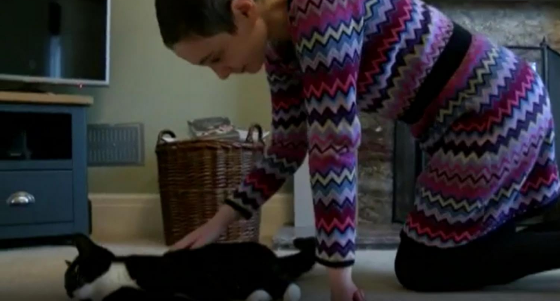 Suffering from bone cancer, little Evie underwent a heavy treatment difficult to bear. Fortunately, Genie was at her side to support her.
In March 2016, doctors diagnosed 11-year-old Evie Henderson with bone cancer. To heal, the girl had to go through chemotherapy sessions, several operations and stay long days on a hospital bed, away from her parents and her adored kitty, Genie. The latter was her best support in her hard time.

Always there for her little mistress

When her little mistress was at home, weakened by her treatment, the kitty no longer left her, slept constantly with her and comforted her with purrs and tender hugs.
And even when she was hospitalized, the little girl found a smile by watching videos of her hairball.
Evie is certain, it is to a large extent thanks to her best friend and their powerful bond that she owes her remission. Her parents share her feelings along with the Cat Protection Association which awarded Genie the prestigious title of National Cat of the Year at an official ceremony in London.
“Evie spent nearly 300 days in the hospital and knowing that she would find Genie at home gave her a goal,” recalled her father Chris for the BBC.
“She’s my best friend and honestly, I do not know what I’d do without her,” Evie adds, proud of the award for Genie. The little British remembers how the adorable kitty helped her overcome the loss of her hair.
“It was very difficult for me because I had long brown hair. But it was spring and Genie was moving so it was as if we were losing our hair at the same time and it made it a lot easier.”
Today Evie is getting better and the bond she shares with Genie is even stronger. The latter will always be there for her.