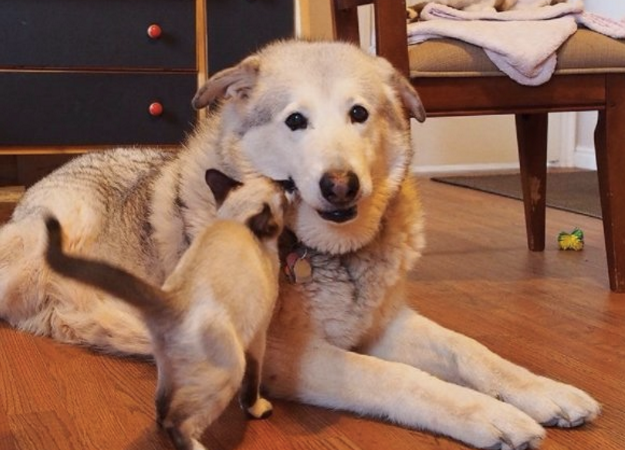 Flora, the dog, had been living a quite harmonious life with her human family as well as the company of a 20 year-old cat, Dexter. When the family first adopted Dexter from Best Friends Animal Society, they didn’t expect him to get through to Flora’s heart that quickly and deeply that they became best friends. In fact, what encouraged Williams family adopting the old cat was knowing he may not have much time left ahead of him, but his passing away two years later made it astonishingly hard for all family members, especially Flora.
“Flora was very worried and sad,” Jill Williams, Flora’s mom and a manager at Best Friends Animal Society, told The Dodo. “She paced around and whimpered. She spent a lot of time outside and did not want to come in. She would howl, which she rarely does, and it broke our hearts.” 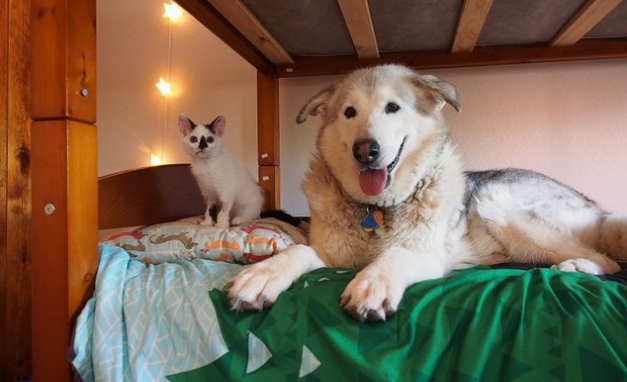 In an attempt to ease Flora’s broken heart, Jill Williams decided to bring two young cats, but none could fill Dexter’s gap. The two young felines couldn’t accept a mutual cuddles with Flora. Flora’s vacuum left by Dexter’s death still nourished the pain in her little heart.
One day came the relief.
Williams family decided to foster some kittens. Fostering kittens, in fact, wasn’t a decision aimed to address Flora’s hard time. Williams just intended to teach her kids the importance of fostering, and had no idea that this may stir the joy again in Flora. So, four kittens, namely, Iggy, Bowie, Roxy and Glamour, joined the family.
Since the first day of the kittens’ arrival, things began to change, and flora’s smiley face started to recover. Days later, the kittens and Flora got the opportunity to meet, and Flora seemed to finally find the right folks to fill Dexter’s gap. 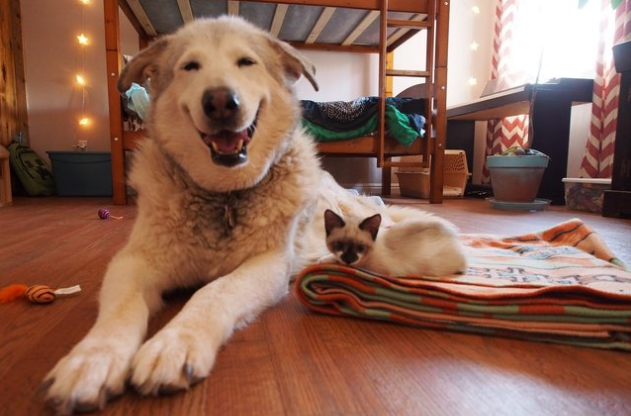 “All four of them immediately walked over to her, completely unfazed by her larger than life appearance,” Williams said. “Iggy was the first brave boy — he went right up and sniffed her nose. She gently brought her face down to meet his. He did not flinch or hiss. She got this huge smile on her face and then the other three came trotting over to say hello.”
Flora becomes the mom for the little kittens. She spends most of her time with them, joining them playing, cuddling and she also make sure to watch over them.
“We’ve been letting Flora explore the kittens every day,” Williams said. “She gets so happy when they approach her. Recently Bowie started to groom Flora. She just closes her eyes and starts to smile. When Flora enters the kitten room, they swarm around her. She gives them each a sniff and tiny lick, and finally she either hops up on the bed or circles around to find the best spot on the floor — wherever there are more kittens.”
The kittens succeed to turn joy to Flora, and Flora in turn helps socializing the kittens.